In 1936, at the height of the Great Depression, writer Henry Miller published a slender volume titled, “Money and How it Gets That Way.” It is a mock economic thesis, full of such questionable “facts” as that the Venezuelan Bolivar was named for Patsy Bolivar. Miller follows the development of money from ancient herds of cattle through the elimination of the gold standard.

But one thing holds it all together: the sense that money is palpable, that it is a real thing.

“To have money in the pocket is one of the small but inestimable pleasures of life,” he wrote.

Most of us think of money as something abstract, as a symbol for wealth — something of no intrinsic value which may, however, be traded for something more tangible, like a loaf of bread or a fully-loaded Lexus. We accept money has having value because there is something genuine behind it: usually the gold we have taken out of the earth, melted down into blocks and then buried back in the earth of Fort Knox.

“In fact, when we search for a counterpart to the role of gold in human life, we can adduce nothing to equal it in obsessive persistence unless it be man’s continuous and uninterrupted preoccupation with the navel,” Miller wrote.

One continually forces oneself to forget that gold has no more meaningful value than the paper dollars we give each other; gold has little use in life: You cannot eat it; you cannot wear it. Its value is that we all agree it is valuable. Take away our estimation of it, and gold is just another pretty pebble. There is no essential difference between gold as a medium of economic transaction and wampum.

But whether we talk about money as an economist or as a banker, we quickly forget that money has a physical existence — the change that rattles in your purse, the bills that get folded or wadded in your pocket. Since they occupy a place in our minds as “markers” for the wealth they symbolize, we seldom take time to look at our currency or specie as a thing in itself.

One dollar bill, series 2003, obverse, with acanthus and olive leaves.

Take a Washington out of wherever you hide it and take a look at it. It is a very fine cotton-fiber paper with an excellent ink on its surface. That ink is woven out into many fine lace-like lines and punctuated with tiny dots — if you look at the portrait on its face, you see that George Washington is made up entirely of black lines and dots, put there by a talented engraver. Except for the letters and numbers on it, most of the rest of what you see are a swirl of olive and acanthus leaves and a fine reticule of intricate scroll work: Imagery lifted wholesale from the art of ancient Rome filtered through the Italian Renaissance. In other words, it is art.

You can say the same thing for the coins you have. The model for a coin, with a face on one side and something else on the back, goes back beyond Rome to the ancient Middle East and even to India. The king’s visage is there to let you know — or believe — this is genuine coin of the realm, and vouched for by the dignitary whose portrait endorses its value.

And there was a time when the value of money as art meant that there were artists who designed it. One of the most beautiful coins ever was designed by America’s greatest sculptor of the 19th century, Augustus Saint-Gaudens.

But look at recent redesigns, and you are forced to conclude that our money is now being designed by bureaucrats. Where once there were scrolls and leaves, there is now a garish purple numeral and a host of anti-counterfeiting features, including fluorescent inks. The scroll work has been largely wiped clean. There is a lot of empty space in the newest  $5 and $20 bills.

Five dollar bills from the past

Look at an old bill, before the “improvements” of the 21st century. Not only are the portraits more lifelike — there’s a personality behind the eyes in Grant’s picture on the $50 bill — the designs also are fuller, more detailed and graceful, full of trailing acanthus and olive leaves.

The vegetative growth and architectural motifs that used to grace our bills announced our national fecundity. We were a waxing moon, a rising tide. The scrollwork and border ornament recalled the inventive bustle of the Renaissance.

The new bills, full of iridescent ink, microprinting and watermarks to discourage counterfeiting, are defensive and speak of a nation feeling the need to protect itself. There is no room now for the purely ornamental or decorative profusion of the old designs. Everything there has a purpose, stripped down like some typographic battlement. 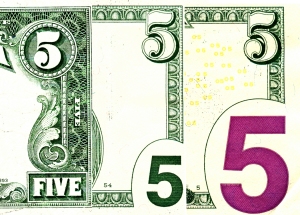 Genuine beauty comes from an effusion of confidence and grace; in contrast, our new bills look as though they were the product of forensic engineers.

Even worse are the newer coins, which look less like legal tender and more like tokens at a state fair. Or perhaps you catch yourself trying to peel back the foil to eat the chocolate inside.

The portraits on them are an embarrassment — one observer noted that the frontal portraits must have been “zombie presidents.”

One problem is that the coin designers have chosen to represent the faces not in profile, but head-on. It’s hard to make a shallow relief sculpture of a full face without having the nose stick out too much. The new coins try, but because they have to be flat — after all, they have to stack — the nose gets squashed flat into the cheeks, and the eyebrow ridge stick out as much as the nose. Hence the zombie look.

Madison looks more like Count Olaf in the Lemony Snicket movie than a founding father. Jefferson has an eyebrow ridge like Frankenstein’s monster.

The James Madison portrait on the obverse side of one of the new $1 coins.

If you have more than a couple of quarters, at least one is likely to be the old eagle-backed quarter that has been standard since 1932, and another will probably be one of the new state quarters.

Look at Washington’s head on both. The old head was satisfying and sculptural; the new head is flat, ugly and can’t make up its mind if it wants to be bas-relief sculpture or incised drawing. Sculpture and drawing are different things, and they don’t sit well together in such a tiny space as a coin. You should look at some real quarters; the pictures on your screen don’t tell you how badly fallen the craftsmanship has become.

“Relief on most modern coins is lower,” said one spokesman for the Mint, “because of volume and vending-machine usage. When you make billions of coins, you don’t do the same relief.”

In fact, there’s hardly any relief at all.

You can see that confusion between the three-dimensional sculpture and the outlined two-dimensional drawing on many of the individual state designs. The Michigan quarter is practically nothing but an outline map of the state. That isn’t sculpture. Coins this dull could be molded out of plastic.

The older quarter design is more sculptural (left), while the modern quarter’s face — on the state quarters — is flatter and a mix of relief and incised drawing, mixing two ways of thinking about images, none too successfully.

Even the space around Washington’s head is a disgrace. Move the old quarter in the light to notice that the background space is not flat, but dish-shaped. Because it’s modulated, it catches the light as it moves in a way that makes the space — even the empty space — come alive. But the new quarter has a flat, uninflected background, as if no one really cared or paid attention.

Perhaps decline is a historical inevitability. As a comparison, consider the course of drapery in ancient sculpture. In pre-Classical Greece, as in the famous Charioteer of Delphi, the draping of his clothes are straight and uninflected; later, the drapery more closely follows the contours of the body beneath it; during Hellenistic times, the drapery is utterly virtuosic, and expresses a proud study of the way things really look. Early Roman sculpture continues this tradition, albeit with less virtuosity. But after the Third Century or so, the connection between the folds of cloth and the human shape beneath becomes divorced; drapery has folds, but they are coarse and conventionalized. By the time you get to Romanesque statues, the drapery is merely ornament. It is hard not to see this historical arc as anything but a decline.

One sides with Gibbon: The influence of Christianity on antiquity meant, among other things, a growing contemptus mundiand loss of pleasure in the real world, replaced by a world of signs and symbols.

Beautiful acanthus-design engraving on the reverse side of the $1 bill.

This is what happens when people lose their ability to see, and to look with attention. It has often been said that we live in a visual culture, but that’s not really true. We may have given up the written word, but what we are calling visual is really just a written symbol: The stick-figure female that signifies the women’s restroom. You read such symbols, not see them. It gives up its meaning instantly.

A real woman, in contrast, can be studied for a lifetime. 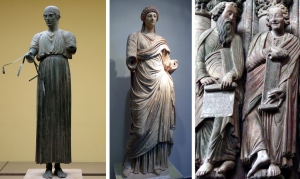 Richard Nilsen inspired many ideas and memories at the salons he presented through the years when he was an arts critic and movie, travel, and features writer at The Arizona Republic.   A few years ago, Richard and his wife moved to North Carolina.   We want to continue our connection with Richard and have asked him to be a regular contributor to the Spirit of the Senses Journal.   We asked Richard to write short essays that were inspired by the salons.