Predicting the Oscars is always a tricky enterprise, but I earned a small (tiny) place in history — and my only citation in Wikipedia — for a prediction I made in June of 2007: “Richard Nilsen from Arizona Republic,” noted the Wiki entry on the movie, “was even more enthusiastic, writing ‘don’t bother voting. Just give the Oscar to Marion Cotillard now. As the chanteuse Édith Piaf inLa vie en rose, her acting is the most astonishing I’ve seen in years.’

This, it should be noted, was written six months before the 2007 Academy Awards nominations were even announced, before the opening of such best actress nominee films as as Cate Blanchett in Elizabeth: The Golden Age (October), Laura Linney in The Savages (November), and Ellen Page in Juno (December). Only Julie Christie in Away From Her had opened earlier (in 2006, so I’m not sure why it was eligible for the 2007 Oscars — anyway, I reviewed it for The Republic in May of that year).

All I’m saying is, I was so confident in Cotillard’s ascendency, that I pronounced her victory before most of the films of the year had even opened. And this despite the fact her role wasn’t even in English, and the Oscars tend to be Anglophile in prejudice (previously, no foreign language film had ever brought an Oscar to its lead actress).

You can imagine just how smug I felt when Cotillard accepted the statuette from Forest Whitaker. “Thank you life; thank you love,” she said.

Of course, I wasn’t so smug on March 21, 1999, when the Academy proved, once again, that the best doesn’t always win the award. The films of 1998 duked it out and I had been assigned to see all the Best Film nominees and write about them.

“(Saving) Private Ryan was the big surprise for me. If it doesn’t win the Oscar, something is wrong. I haven’t seen a movie that well-made — and overpowering — in a long, long time,” I wrote. Well, something was wrong.

I listed my films in order of preference:

“1. Saving Private Ryan — Not only the most impressive piece of moviemaking of the year but probably of the decade. Director Steven Spielberg manages to make great art entertaining.

“2. The Thin Red Line — You come out realizing, ‘This isn’t really about war, is it?’ No, its meaning is cosmic where Private Ryan’s is civic. Director Terrence Malick has made something like a modern version of the Bhagavad-Gita

“3. Life Is Beautiful — Of the three war films nominated, Roberto Benigni’s is the most personal. Neither cosmic nor civic, it is the one that makes you care most deeply for the fate of its characters. It is funny, inventive, profound, disturbing — all at once.

“4. Elizabeth — Makes a convincing case that this young, naive woman could develop the political savvy to survive in the (literally) cutthroat environment of English

Renaissance politics. Besides that, I could look at Cate Blanchett’s riveting face for eight hours, no break.

“5. Shakespeare in Love — A huge disappointment, it turns out to be nothing but an extremely well-written and witty sitcom. Also, I couldn’t take seriously any Shakespeare who looks this much like the artist formerly known as Prince.”

I’m sure you remember which film ran off with the Oscar, in fact, ran off with seven Oscars. My emotions that night were somewhat akin to how I felt this year on Nov. 8. “Whuuuuu????” Sometimes, things go horribly wrong.

The problem with the Oscars, though, is that they go wrong so frequently, and so predictably. Which is why some film-critic Oscar prediction stories run parallel lists: “Who will win,” versus “who should win.” The critic knows that the Hollywood insiders who vote tend to go for high-minded films, no matter how much baloney they dish out; or films that dump a Scrooge McDuck-load of money on their studios; or actors who lose or gain a great deal of poundage; or who portray some disability or other; or have been notoriously overlooked for previous films and now given the award for some current mediocre work while they should have won earlier. They are loathe to reward a difficult film, one with a less-than-uplifting ending, or one that is too innovative too soon. (Those innovations will be rewarded in the sixth or seventh generation film that has learned from them). (Footnote: I should make clear, I am talking about the “major” categories; innovations frequently garner awards in the technical categories, in part, because they are voted on not by the Academy membership in general, but only by their peers, who actually know what is going on.)

We can go down the long list of Oscar winners — most notoriously the Best Film winners — and slap our foreheads over and over at the choices. Not that the winners were universally bad films, but that the runners-up were so often better, at least in the eyes of posterity. Consider the Sixth Academy Awards, from 1933, when the winning film was Cavalcade, a film hardly seen anymore, and seldom mentioned. But that same year saw as “losers” such perennial favorites as 42nd Street, A Farewell to Arms, I am a Fugitive from a Chain Gang, Little Women, The Private Life of Henry VIII, She Done Him Wrong and State Fair. What is more, films not nominated that year include Dinner at Eight, King Kong, Duck Soup, Trouble in Paradise and M. What distinguished Cavalcade, aside from maudlin sentimentality? It made $3.5 million that year and joined the list of most profitable movies up to that time.

Take most Top Ten lists from American movie critics, and you will find a trove of films that didn’t win, or weren’t even nominated. Citizen Kane, which used to top everyone’s list, didn’t win. Jean Renoir’s great war film, Grand Illusion, lost out in 1938 to You Can’t Take It With You, which is a memorable film, but not quite in a league with Renoir’s. In 1994, Pulp Fiction — one of the most innovative and memorable films ever — lost out to Forrest Gump. Let me repeat that: Forrest Gump! Looking back from the perspective of two decades, that seems like a missed call. It would be hard, with a straight face to argue that in 1953, The Greatest Show on Earth was a better film than High Noon, or than The Bad and The Beautiful, which wasn’t even nominated.

We should consider some of the films over the years that weren’t even nominated. Beginning with the first ceremony in 1929:Steamboat Bill, Jr., Nosferatu; In 1931, City Lights, Public Enemy; 1936: Modern Times, My Man Godfrey; 1937: Snow White and the Seven Dwarfs; 1941 (the year that overlooked the nominated Citizen Kane, to say nothing of the un-nominated  Maltese Falcon,Suspicion and Sergeant York): Fantasia; 1942: To Be or Not to Be, Sullivan’s Travels; 1946: The Big Sleep, Children of Paradise,Notorious, Gilda, The Postman Always Rings Twice. The list goes on, year by year, but here are a few of the films left un-nominated for the top award by the Academy: The Third Man, The Asphalt Jungle, The African Queen, Singin’ in the Rain, Roshomon, Night of the Hunter, Rebel Without a Cause, The Searchers, The Seven Samurai, Paths of Glory, Vertigo, Touch of Evil, Some Like it Hot,Wild Strawberries, Psycho, Spartacus, In Cold Blood, 2001: A Space Odyssey, Rosemary’s Baby, The Wild Bunch, Easy Rider,Little Big Man, Mean Streets, Sophie’s Choice, Fanny and Alexander, Blood Simple, The Princess Bride, Do the Right Thing, Crimes and Misdemeanors, Cinema Paradiso, Leaving Las Vegas, The Big Lebowski, Being John Malkovich, Magnolia, Fight Club, Boys Don’t Cry. 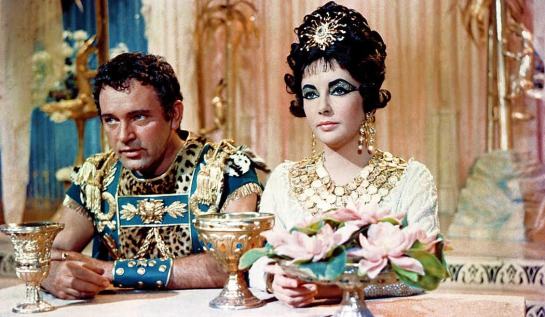 Box office, as I said, sometimes has a hand. How else can you explain the nominations (not wins, thank goodness) of John Wayne’s The Alamo in 1960 and Cleopatra in 1963. That latter fiasco may be the worst film ever nominated for any award other than a Golden Raspberry. As a yardstick, it was the same year Fellini’s 8½ wasn’t even nominated. In 1986, when Out of Africa took home the statuette, Kurosawa’s Ran wasn’t nominated.

I’ve listed films for only one category: Best Film. But other categories have their own embarrassments. Consider that in 1941 John Ford (no slouch for sure) won over Orson Welles for Citizen Kane. Surely, in hindsight, Kane is one of the greatest directing jobs of all times, while Ford’s How Green Was My Valley is one of his lesser

efforts. One of his best, The Searchers, didn’t win in 1956, because George Stevens did, for a trumped up epic, Giant. Marty is a moving film, from 1955, but for its writing and acting, not for its direction, yet the brilliantly directed Night of the Hunter, Charles Laughton’s only film as director, lost to Delbert Mann’s Marty.Vertigo is currently listed as the Greatest Film of All Time (for which I disagree, but it is the critics’ favorite), but was not even nominated for best director (Alfred Hitchcock), while the award went to Vincente Minnelli for the treacly Gigi. Perhaps the worst of all, John Avildsen of Rocky beat out Martin Scorsese for Taxi Driver in 1976. Someone should have been hanged for that. It’s at times like that when you realize there is no assurance of justice in this world.

Pacino in Godfather Part II. One could go over each major category and find head-scratching outrages.

Which brings me back to 1998, when Shakespeare In Love beat out its betters. That is the biggest head-scratcher of all, to me. The first 20 minutes alone of Private Ryan will be taught in film schools for decades while Shakespeare In Love will be played as a filler on TBS cable after the last daily rerun of Big Bang Theory. Academy muffed that one.

It is  important to keep all this in mind this year when the awards are given out, once again, to the mediocre, meretricious and magniloquent.

Richard Nilsen inspired many ideas and memories at the salons he presented through the years when he was an arts critic and movie, travel, and features writer at The Arizona Republic.   A few years ago, Richard and his wife moved to North Carolina.   We want to continue our connection with Richard and have asked him to be a regular contributor to the Spirit of the Senses Journal.   We asked Richard to write short essays that were inspired by the salons.