.
by Richard Nilsen
.
Where is the East? In a round world, everything is east of somewhere. But the “East” is something different. It is an idea.
.
It is an idea that goes back at least as far as Homer and the Trojan War, between the Achaeans of Europe and the Trojans in Asia Minor. It is an idea that recurs over and over. East and West. East Germany and West Germany; eastern Europe and western Europe; the Eastern Bloc and NATO. We have all lived through a Cold War divided with the Soviets playing the part of the East and the U.S. leading what we habitually call the West.
.
Us and them is perennial. The real world is seven billion thems, each different, some 200 nations, all different, myriad cultures, each distinct. Yet, we still tend to break the cake in half. Us and them. The enlightened West and the inscrutable or barbarous East.
.
Certainly the template for the way we think of this dichotomy was devised in the years during and after the Fifth Century BCE, when the Greeks defended their heterogeneous lands against invasion from the Persian Empire. It was given mythic importance by the writers chronicling the events by making it a culture war between the enlightened, rational Europeans and the Oriental despots of the East. It set the “us against them” trope up for the next 2500 years.
.
Yet, the East isn’t merely an opponent. There is a seductiveness to the idea that plays out in Orientalist fantasies, such as the Arabian Nights and its harems;

the exoticism of Samarkand and the Trans-Oxiana; the fragrances and flavors of the Spice Islands; and the calm spiritualism of Tibetan Buddhism and the Dalai Lama.
.
In Classical times, the word “Asia” referred to Anatolia and the Levant. There was a vague awareness that there was an India out there that Alexander the Great had almost conquered, and a sense that black pepper and cloves came from somewhere beyond that, but little hard knowledge.
.
All that began to change in the 14th century with the diffusion of a famous book that almost no one now reads: The Travels of Marco Polo. It is a wonderful grab bag of information and tall tales, misunderstanding and hyperbole. I have now read it so you don’t have to.
.

Marco Polo left his native Venice in 1271 at the age of 17 with his father and uncle headed toward the China of Kublai Khan. He remained in the East for the next 24 years, often working as a diplomat for the Great Khan. He traveled from Beijing (then called Khanbaliq) to Tibet, India, Java and Vietnam. He also learned of other nations from Abyssinia to Mongolia.
.
When he finally returned to Venice at the age of 41, he found his city at war with rival Genoa. He was captured by the Genoese and imprisoned. In the introduction to his Travels, he states that “rather than idle away time, he decided to put together this book for the entertainment of readers. So he had all these things written up by Messer Rustichello of Pisa, who was in the same prison; that was in the year 1298 from the birth of Jesus Christ.”
.
In other words, like so many quick sports memoirs, it was written “as told to.” Rustichello was a hack writer and how much of the book is a faithful transcription of Marco Polo’s words and how much of it is fabrication has long been an issue.
.
(It should also be noted that Polo’s book was compiled before Gutenberg, and hence was distributed in manuscript form, translated, none too scrupulously into dozens of languages, often with new material added, old material deleted and many mistranslations compounding the confusion. There is no single “right” version of the book, only hundreds of guesses.)
.

Certainly, it is not a gracefully written book. It is often tedious and repetitive. As Polo moves from city to city and nation to nation, he often repeats the same formula:
.
“Kesh-Makran is a kingdom with its own king and language. Some of the people are idolaters, but most are Saracens. They live by trade and crafts. They have plenty of rice and wheat. Their staple foods are rice, meat

and milk. Merchants come here in large numbers both by sea and land, bringing many wares and afterwards carrying away those things of this kingdom. There is nothing else worth mentioning.”
.
The narrative is rife with stock phrases: “What shall I tell you of?”; “You may believe me when I say that…”; “Now let me tell you…” and the ever-familiar, “There is nothing else worth mentioning.”
.
I think one of my favorite paragraphs comes near the end of the text: “Since we have told you about these Tartars of the Levant we will now take our leave of them and go back to speaking about Turkestan, so that we can hear all about it. But as a matter of fact we have already told you all about Turkestan and how it is ruled by Qaidu, so we have nothing left to say about it. And so we will move on and tell you about the provinces and peoples to the north.”
.
In the whole book, we learn almost nothing about Polo himself or what he does, but rather like a gazetteer, he lists countries and kingdoms and gives a brief summation of who they worship, what they eat, and whether or not they owe fealty to the Great Khan. If we are lucky, there are weird or interesting footnotes that speak of folkways or cannibalism or wild promiscuity. There are longer set-pieces describing wars and battles.
.
It would be hard to overstate the influence of Polo’s book. Despite its many omissions and that it contains much that is apocryphal or at least wildly inaccurate, it gave Europeans a new vision of the rest of the world. It most likely influenced Columbus and its inaccuracies may have convinced the Admiral of the Ocean Seas that the Earth is much smaller than it actually is, leading him to believe the voyage west to the East would be shorter than it turned out — not even counting the North American roadblock that he never suspected.
. 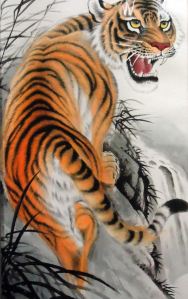 But you keep coming across passages that describe things Marco Polo has misunderstood or misnamed. I want to give you three of them. The first is part of his description of western China, which he calls Tibet (although not actually the region now called Tibet):
.
“You should also know that the emperor … has many enormous lions, much bigger than those of Egypt. They have gorgeous richly colored fur marked with longitudinal stripes of black, red and white.”
.
Elsewhere, he lets us know:  “The fact is that throughout the province of Cathay there is a kind of black stone that is dug from seams in the mountains and burns like logs. These stones keep a fire going better than wood. Moreover I assure you that if you put them on the fire in the evening and make sure they are well lit, they will keep burning all night and you will still find them glowing in the morning.”
.

But my favorite is: “They have wild elephants and plenty of unicorns, which are scarcely smaller than an elephant. The unicorn has the hair of a buffalo and feet like an elephant’s. In the middle of its forehead is a single horn, very thick and black. I assure you it does no harm with its horn but only with its tongue and knees; for it has long, sharp spines on its tongue, and whenever it wishes to hurt anyone it tramples him and holds him down with its knees , then slashes him with its tongue. It has a head like a wild boar’s and always holds it bowed towards the ground. It is perfectly content to wallow in mud and mire. It is a very ugly beast to look at. It is nothing like the animal we talk of and describe in our parts, where we say that it lets itself be caught by a virgin; in fact I can tell you it is the exact opposite of what we believe it to be.”
.
A good deal else is the exact opposite of what we believe it to be. The East is burdened by a host of our cliches, misperceptions and prejudices — not the least of which is the idea that there is such a single thing as the East. The earth’s largest continent is home to a profusion of cultures with concomitant variety.
.
Those prejudices have caused untold troubles, from the Chinese Exclusion Act of 1882 to the Japanese internment camps of 1942. You see the fear and ignorance show up in popular entertainments, novels and movies. From 1919’s Broken Blossoms through James Bond’s Doctor No. There is not room to go into Hollywood’s yellowface tradition, or the stereotyping found in Charlie Chan, and Mister Moto movies, or the embarrassment of Mickey Rooney’s Mr. Yunioshi in Breakfast at Tiffany’s or Marlon Brando as Sakini in Teahouse of the August Moon. Whole books have been written.
.
The prototype stereotype of the evil Oriental is perhaps Sax Rohmer’s Dr. Fu Manchu. Introduced in 1913 in The Insidious Dr. Fu Manchu, Rohmer describes his villain: “Imagine a person, tall, lean and feline, high-shouldered, with a brow like Shakespeare and a face like Satan, a close-shaven skull, and long, magnetic eyes of the true cat-green. Invest him with all the cruel cunning of an entire Eastern race, accumulated in one giant intellect, with all the resources of science past and present, with all the resources, if you will, of a wealthy government which, however, already has denied all knowledge of his existence. Imagine that awful being, and you have a mental picture of Dr. Fu-Manchu, the yellow peril incarnate in one man.”
.
Getting things wrong, or mostly wrong, goes back way past Marco Polo, but it goes forward from him also. We see what we think we see, not what is actually there.
.
In the 1930 movie, The Mask of Fu Manchu, the fiendish villain is Boris Karloff in yellowface. And he is duded up in Oriental finery, although what he wears is actually a wealthy Chinese woman’s wedding dress.
.
Postscript: Two and a half millennia later, Persia is back as a dangerous “other,” although now called Iran. And the yellow peril is now a nuclear North Korea. Of course, China still makes us twitch, too. And on the news one hears the age-old tropes, and it is hard not to worry that the same one-dimensional ignorance is governing our foreign policy. The history of ignorance and misunderstanding is long and painful.
.

Richard Nilsen inspired many ideas and memories at the salons he presented through the years when he was an arts critic and movie, travel, and features writer at The Arizona Republic.   A few years ago, Richard moved to North Carolina.   We want to continue our connection with Richard and have asked him to be a regular contributor to the Spirit of the Senses Journal.   We asked Richard to write short essays that were inspired by the salons.